History of the Senior Championship Program

The CVIBL,VBL and Big V History

History of the League

In 1987 a competition called the Country Victorian Invitation Basketball League (CVIBL) was introduced for Women’s teams from Country Victorian Associations. The CVIBL was the brain child of Bruce McDonald from Swan Hill, one of our truly creative administrators. For many years the League was conducted in an outstanding manner under the direction of Isobel and Frank Smith (also from Swan Hill).

In 1989 a Men’s Division of CVIBL was introduced and again was conducted professionally by a number of different administrators. Fourteen clubs were foundation members, and to minimize travel and administration costs, they were divided into two conferences. Terrill and Watson named after two men who made considerable contributions to basketball in the country regions.

As a result, the CVIBL soon grew to include many Metropolitan teams and became one of the true success stories of Australian Competition Basketball.

In 1991 control of the CVIBL was shifted from the BV Country Council and run by a separate body. The CVIBL later became known as the Victorian Basketball League Inc – VBL

In 2000, the Australian Basketball Association (ABA) decided to introduce a Victorian conference and invited the VBL to join. The new elite competition was named the Big V and became the ABA’s fifth conference, joining the South, East, North and Central conferences. The ABA ceased operations following the 2008 season, resulting in the Big V becoming an Independent League.

The Big V is the Senior Basketball League in Victoria, Australia comprising 102 semi-professional teams in 10 competitions.These competitions comprise of both genders, and incorporate four levels of Senior Competition (Men), three levels for Women and Youth Leagues. As a member of the Australian Basketball Association (ABA), the winner of the Big V Championship League gains automatic entry for the Australian Basketball Club Championships against the winners of the other ABA conferences.

In 2017 VBL Inc (Big V) ceased as an independent body and became part of Basketball Victoria under the guidance of the  Senior Representative Commission. The Big V League continues to run under this Commission.

Whittlesea is also one of the few Associations to have players that were so dedicated that they have played over 200 Big V Whittlesea games. All of these players below have now retired from Big V Basketball. A huge Congratulations to these players.

Below there is some old photos and information on the first teams entered into the Senior Competition. 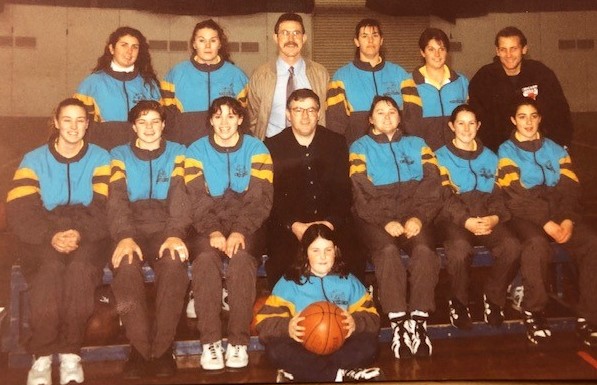 Our Women’s team entered the CVIBL in 1995 and was coached by Rino Zancan. It was a tough introduction into the Country Victorian Invitational Basketball League.

After a Bye in the opening round, the Pacers played Kilsyth Cobras. Kilsyth coming off a win against Castlemaine was never going to be easy to beat. The Cobras were taller and much more experienced.

Mill Park went into the game without center Rachael Clarke and within 5 minutes lost experienced forward/guard Sue Phelan with a knee injury.

This paved the way for 16 year old guards Kylie Guarino and Emma Brown to take the court. They introduced pace and energy into the Pacers side which enabled them to outscore Kilsyth in the first quarter.

The games continued at an even pace and by the main break Kilsyth led by 1 point, 24-23.

Kilsyth dominated the third quarter scoring 24 points to 8. Mill Park had shared the scoring in the first half but it was left to Guarino and Kellie Coulson to make an impact in the third term. Although considerably shorter than her opponents Coulson (178cm) dominated the boards. 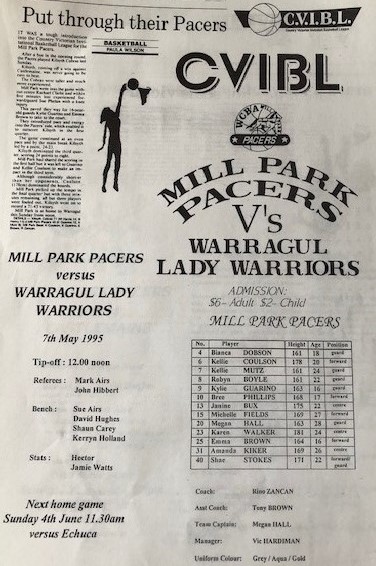 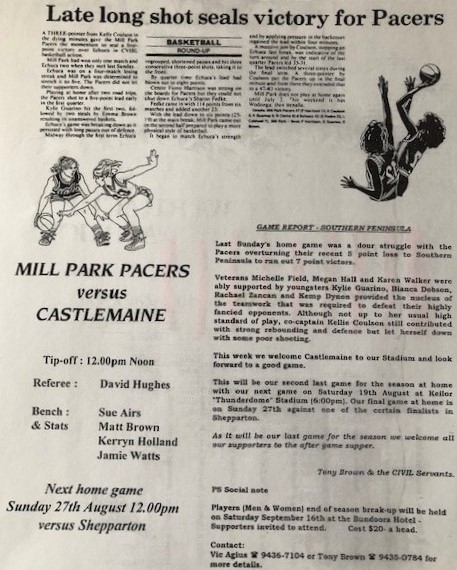 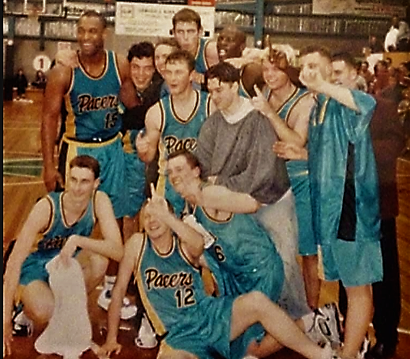 The 1st Men’s team was entered in 1997. They were in Division 1 of the Victorian Basketball League Competition.  In their first year they won the grand final. They played a three game finals series against Eltham. The finals was won in two games straight.

In the finals Sean McCall dominated and ended up  winning the Finals Series MVP. In the second game Chris Smith was a stand out player.To get to the Grand Finals Whittlesea Pacers defeated Echuca Pirates 168 – 123 in game one and 132 – 89 in Game Two.

The team played 20 games for the season, won 18 and lost 2 and finished top of the ladder.

Six players from the list below were from our under 20 boy’s VJBL team. They were Brad Phelan, Chris Smith, Luke Kelly, Jacob Numa, Adam Lenartowicz and Simon Davis.

Stuart Davies was recruited from Keilor and after all these years is now back in 2020, coaching a Junior team for VJBL.

Two of these players went on to play more than 100 VBL Games and another played with Whittlesea from Under 18 through to retirement. 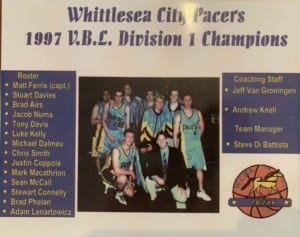 Flags, Coaches  and Photos of Teams that have played in the Finals over the Years 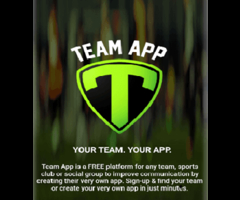 By Jon from The Strength and Rehab HQ

By Zoya from The Strength and Rehab HQ

By Jon and Kieron from The Strength and Rehab HQ 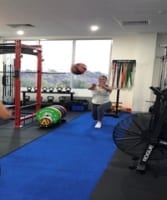 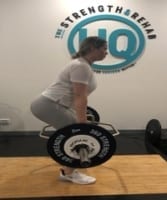